The Crystal Tree by Valerie Parente

There is a plant that sprouts
though not from a seed,
it spawns from a gem.
They call it the crystal tree
and when it’s full grown
sparkling prisms it breeds,
dangling from ebony branches,
a quartz and amethyst variety.

All the boys and the girls
like to go crystal picking,
plucking off shiny rocks,
in return a prophecy is given,
reflecting the constellations
that the stars have written.
Each crystal shows a path
specific to all the children.

One day young Elissa
wandered through destiny’s groves.
Eager for some direction
she plucked a droplet the color of rose
and ever since that day
she thought in poetry an prose
making a living through words
recording her conscience in rows.

Sometimes we find guidance
in the depths of nature
discovering ultimate truths
for man is its mirror.
We can sparkle, we can shine
and nothing is dearer
than the clarity of our instincts
and an intuition that is clearer.

“I’ve come to the conclusion
that everybody who is in a relationship
is hiding from themself,”
said the bitter 25 year old girl. 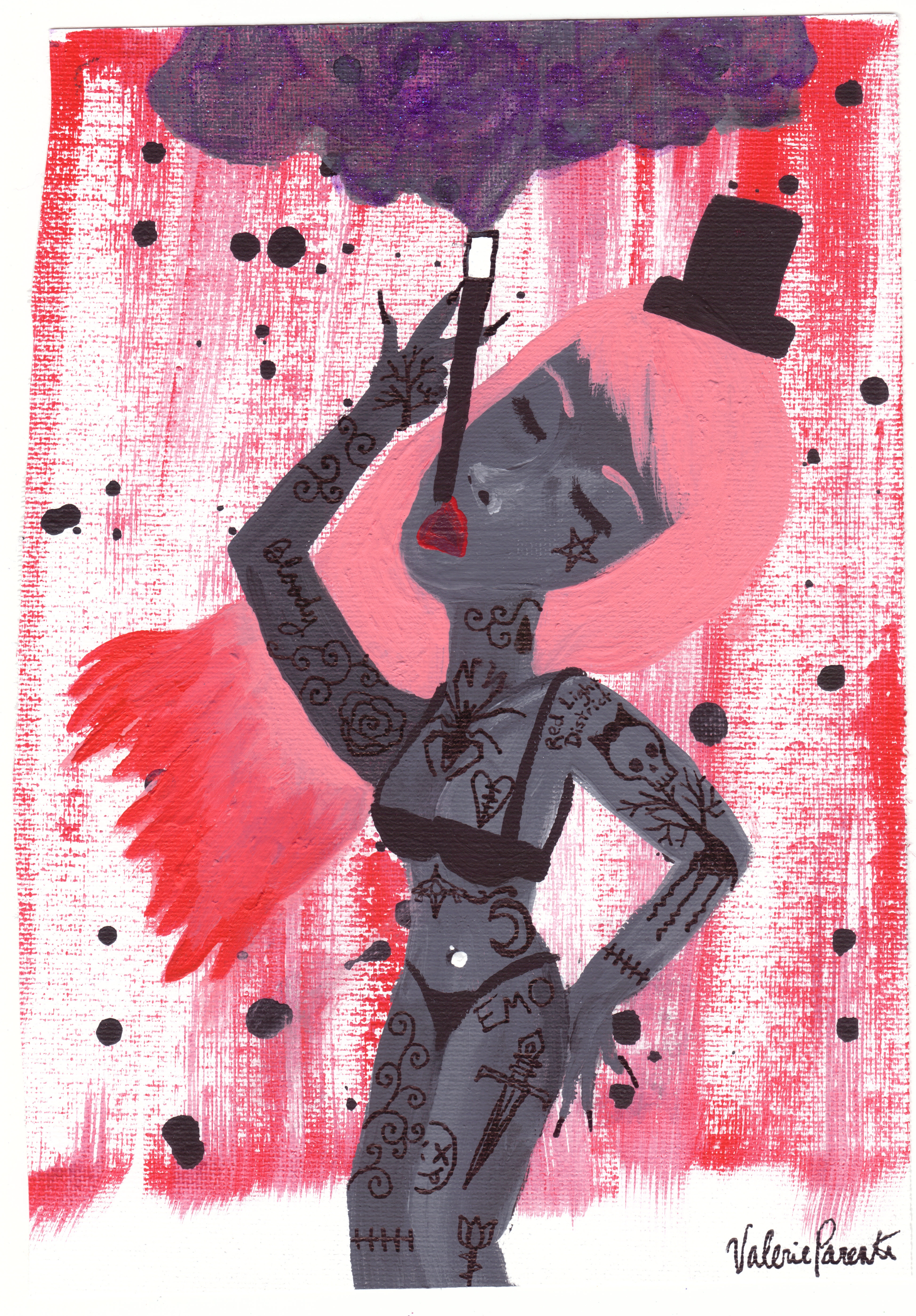 “What did I do to deserve such disrespect?”

“You loved someone who doesn’t even love themself.” 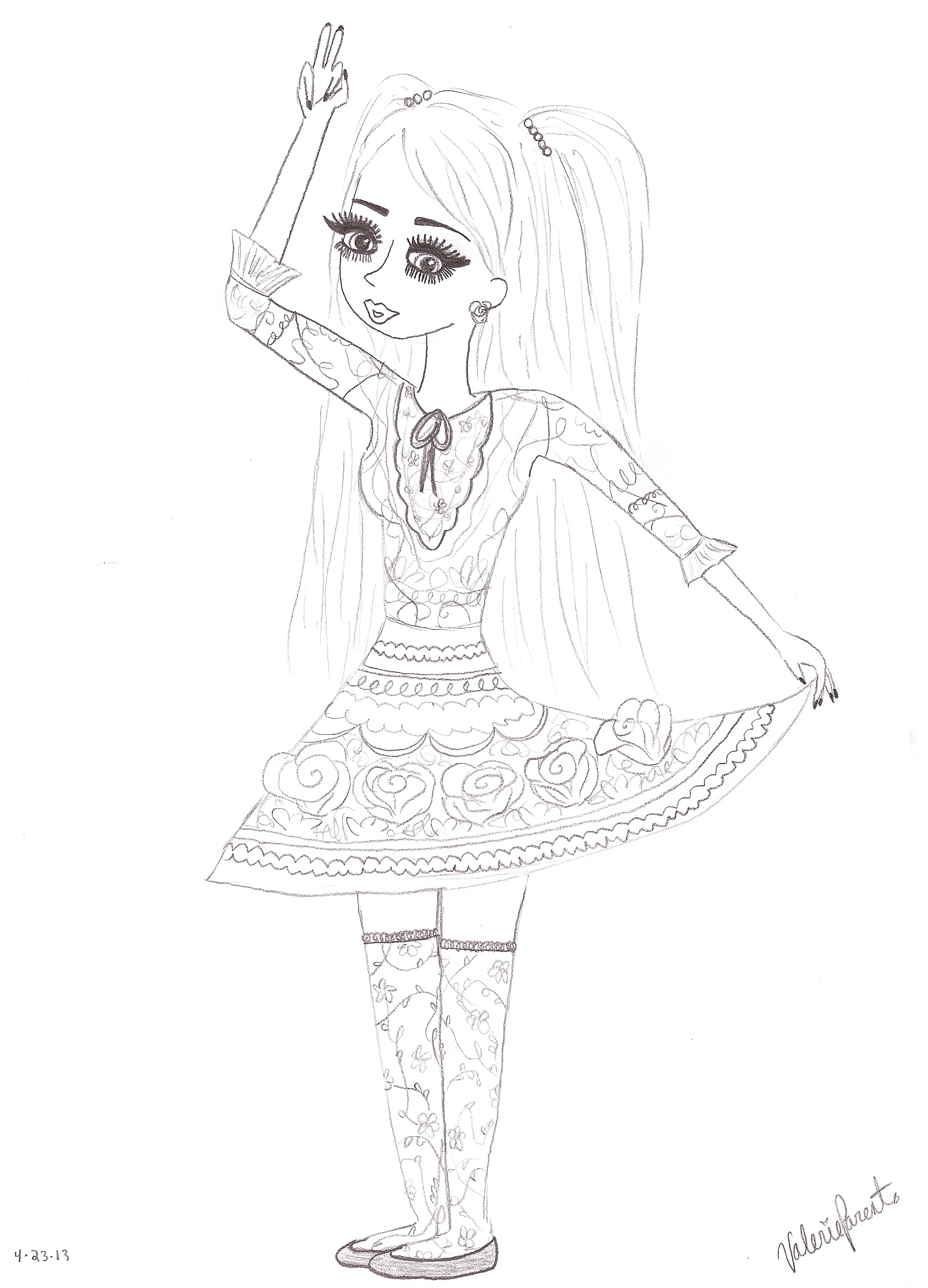 The teacher turned to the schoolgirls, “And what do we say when boys break our hearts?”

The girls raised their hands, “They get rid of our writer’s block.” 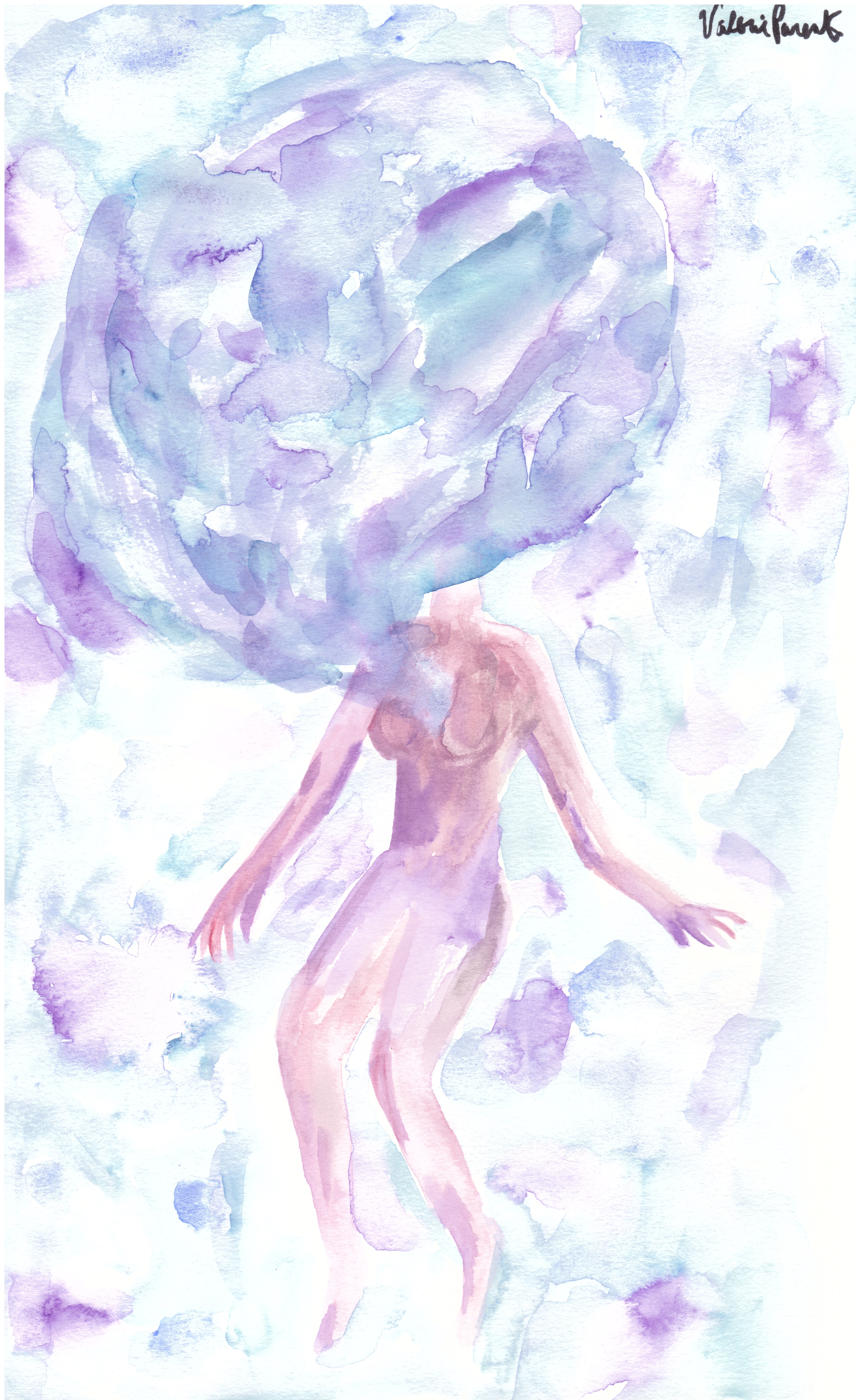 “Dear child,” the being of light proclaimed, “For too long you have been wrapping your identity around victimhood. You are not a victim. You are Divine. You are strong. You are powerful. You are made of the most powerful forces in the universe and that is why you are conscious. Remember your roots. Remember your power. And you will do this through knowledge. Educate yourself. Enrich your life with experience. And depend on no one to save you. Lonely? Teach yourself. When it hurts, listen to the lessons. When it feels good, bask in your essence. When your ego deeply yearns for something please remember that you are not your ego and the things that matter in the grand scheme of life transcend your ego’s instincts and one day in a timeless realm you will feel this deeper than you ever imagined possible. You have learned all of this before you were born, your flesh suit has simply forgotten. All the answers are prevalent to your Divine essence. Activate the soul inside. The answers glow inside your self. Look to yourself, and nobody else. You are Divine.”

He was sick. Nose stuffed. Ears blocked. Miserable on the couch. His only movement came from his fatigued thumb gently scrolling through the phone.

“Open the door” came a text from his close friend.

The floorboards creaked as the girl walked into the loft with a bright smile and a piping hot container clasped between her hands.

“I got you your favorite soup from downtown. Maybe it’ll make you feel better.”

In that split second her eyes shifted from glowing to deeply hurt.

She didn’t shut down. She didn’t back track. She said what needed to be said. “What is wrong with you?” Those piercing words sounded more like they were begging for an answer than asking a simple question.

“Don’t pretend you have my best interest in mind,” she snapped. You never would have guessed that this was the same sweet and giddy girl that just came skating into the loft.

He knew he had a problem. He knew this was his problem but his mind was trying so hard to categorize this as her problem. His thoughts cranked away, trying to rationalize the panic coursing through his veins in a way that didn’t pin the blame on him.

Before he could translate his thoughts into verbal daggers she called him out.

“How miserable it must be to be you,” she shook her head in disbelief, “How little do you think of yourself that you feel the need to stop or shame anybody for caring about you? Not just doing a nice favor for you… but really caring for you. Understanding you. Just because you don’t see your own value doesn’t mean I have to stop caring. You hate yourself so you project all of that onto me and I am so sick of it.” Her mouth quivered in contrast to how strong and stern her tone was.

He didn’t know what to say. He couldn’t figure out a rebuttal fast enough.

“I am NOT your punching bag!” she cried out with a voice so strained you could hear the exhaustion in her vocal chords.

He rubbed his fingertips on his bloodshot eyes up to his temples. Why was he like this? Hurting her feelings was never his intention. His intention… well… what was his intention? He didn’t know.

Her eyes were wet but she didn’t break eye contact. “I’m not going to apologize for having emotions just because you can’t handle your own! I am entitled to feel things when I’m around you. I’m not going to let your self-hatred stop me. I’m sorry but that’s not a war you’re going to win.”

That was his intention.

A dominating part of him was trying to push people away. Not just any people. The people who care… really care. The people who get inside his head. The closer they were to understanding him when he couldn’t even understand himself meant the harder he needed to push. And she understood him and she got in his head and she saw all his flaws but still cared. That’s why this girl was getting the brunt of his insecurity-spawned and fear-born frustration. An unconscious facet of his brain was trying with full force to wind up alone… because being alone would be easier than handling the emotions that come to the surface when you have a real connection with someone.

Sage of Tarkus by Valerie Parente

The heartaches of war that plagued the land of Segaduses left many civilians absent of faith. Lost. Looking for a reason to live again.

Determined to receive some sort of direction from a beacon of wisdom, a damsel from Segaduses traveled thirty miles by knight and steed to arrive at a cabin deep in the woods of Tarkus, home of the most acclaimed sage in all of the land. She had been on a journey for the past three years, searching for an answer to all of her sorrow. This girl with the mint green eyes convinced herself that the cure to her faithless haze could be found by falling in love. Her journey, for the past three years, was none other than a quest for a beloved hero whom could fill her life with purpose and interpersonal connection.

The gown worn by the damsel of Segaduses billowed like a blossoming tulip as she seated herself across the sage.

“I’ve been expecting you, dear,” the pale old woman stirred her chalice, making a burgundy whirlpool of the most fragrant truth serum. As the aroma wafted into stuffy cottage the damsel’s nostrils were filled and the knowledge she had denied deep in the core of her brain was activated.

With a confident nod the sage pointed to the knight on the stallion, outside of the cabin, whom had brought the Segaduses maiden so far along her journey.

“He is the one,” the strong-minded sage determined. “The man on the stallion is the man you will wed.”

For a fleeting second the damsel’s brow furrowed, then quickly vanished. Suddenly with a panic the enlightened yet shocked girl hastily shook her head, as if to rattle away the wisdom of the perceptive woman before her. “Oh no, no… he can’t be. I’ve known him for three years… he’s, he’s always been there in the background. If he were the one I would have known.”

“Dear,” the sage’s raspy voice lowered to a tender lull, “Knowledge does not require your conscious consent. Sometimes our subconscious knows at first sight, but our mind does not realize that what we felt was knowledge until years have passed.”

It took the frazzled girl a moment to respond. Her mint green eyes shivered as she struggled to make sense of the sage’s wisdom. How could it be? How could she have wanted something so badly but have never realized it was right before her eyes?

Adamant that the sage of Tarkus must have made a mistake, the damsel allowed her stubborn mind to wonder aloud, “But how can he be my hero if he does not have my most coveted traits?”

“Well what are you looking for in a hero, my dear?” the sage asked.

“A hero who has the same interests as I do.”

“So he is a reflection?”

“A hero who loves me unconditionally.”

“A hero who knows how I feel before I say it.”

“So he is omniscient?”

Having given up, the damsel sunk deeper into her seat.

Having given up, the Segaduses girl fell deeper into her subconscious, realizing the knowledge her depressed mind had repressed for so long.

“Glittler In The Air” by Valerie Parente 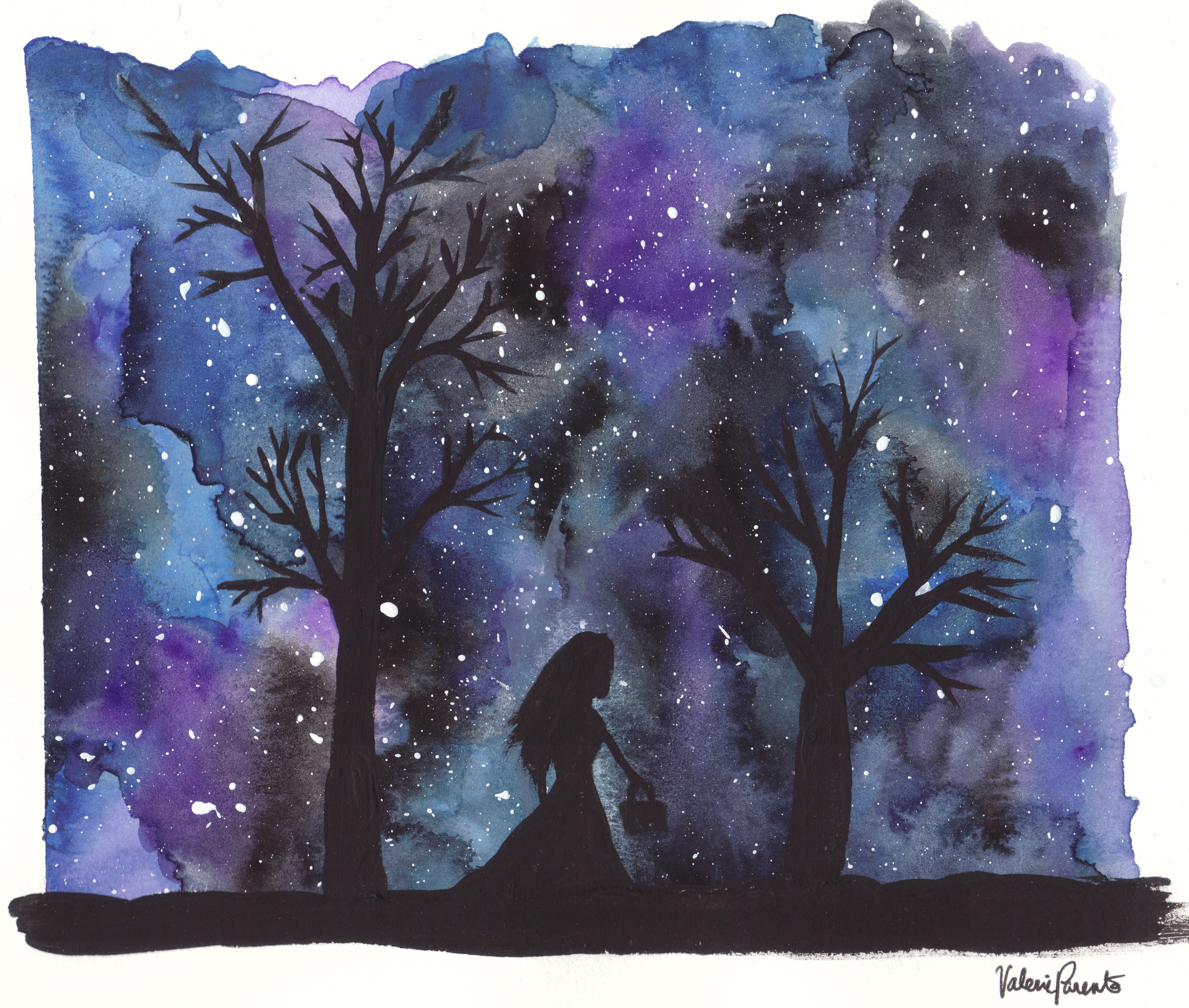 “Run Away” by Valerie Parente

I told a star that I wanted to dedicate a fraction of myself to its bright soul. I preserved my time long before I ever laid eyes on that star. I spent twenty three years cultivating emotions, memories, and wisdom, and waited until it felt right to share these qualities. Then in the rain of my own eyes I was denied. And I guess what I feel now… is lost. I am lost in an immaculate dark forest under the most beautiful canopy of stars. Here I am trying to run away from a sadness surrounded by the sparkling night and I cannot figure out if the glitter in the air is a sign to turn back around, or a guiding light towards new territory.

she could not master astral projection by Valerie Parente

The girl with the mysophobia could not master astral projection.
“This fear and this feeling of germ infestation tainting my skin locks me into physical awareness. To be so in touch with my material self blinds me to the ethereal possibilities of consciousness beyond the body. To open the mind to a realm that needs no space or time is impossible as long as this germ fear persists.”

And so it seems, anxiety is the greatest barrier between us and connection with our true essence. 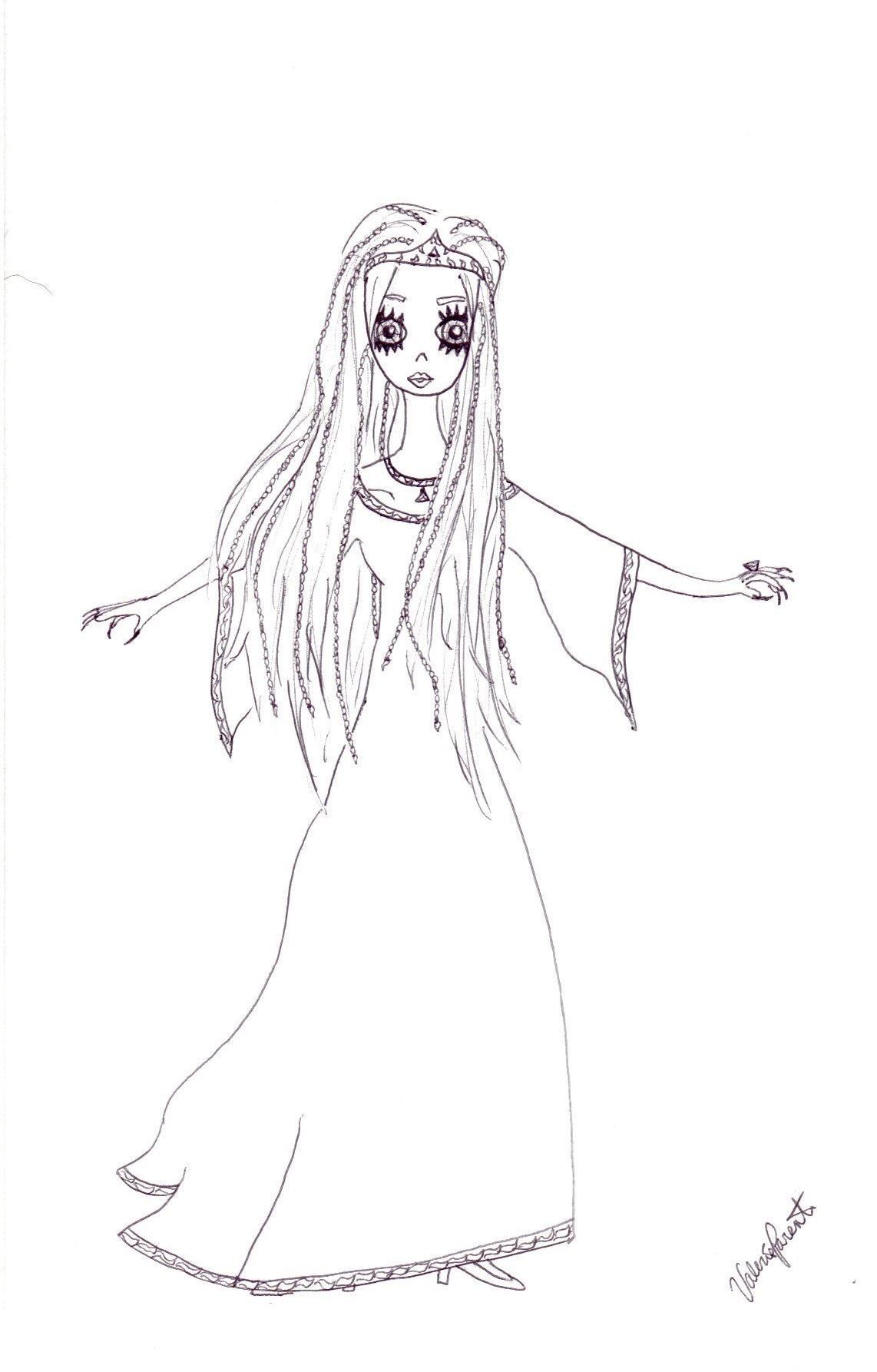 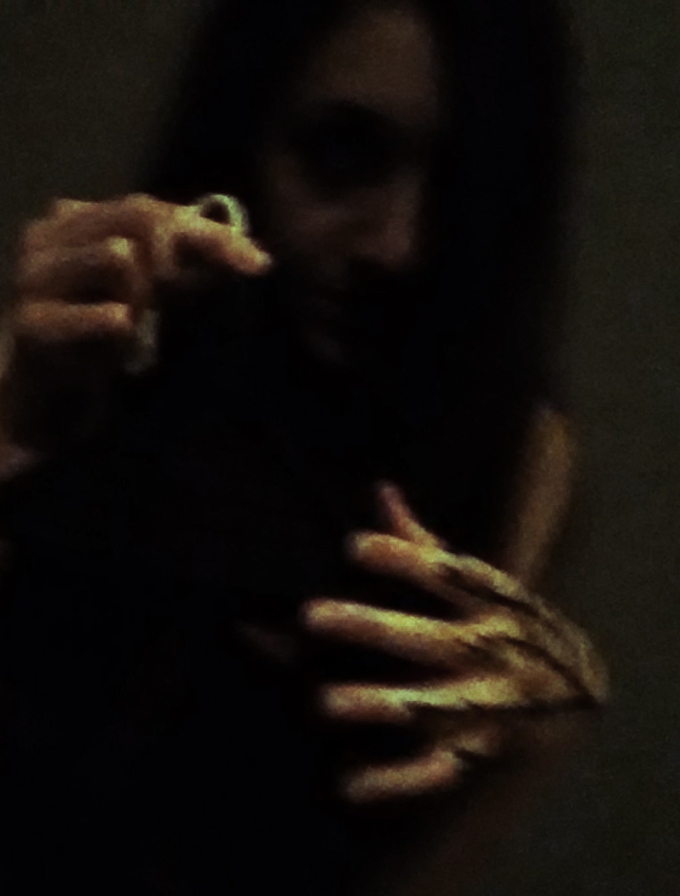 The creeper only came out at night, terrorizing the community with messages of vanity. The creeper swore she meant well, but no member of society believed her.
The creeper had one argument to make before the angry mob in order to defend her vanity.

“Is it so wrong to be a visual person? Is it so superficial to prefer what is aesthetically pleasing to the pupils? If so, I can pinpoint exactly where on the spectrum my thoughts go wrong. Because I possess a black or white mindset that can only think in extremes. Dark or light to touch the eyes. And I chose the dark because the light is blinding.” 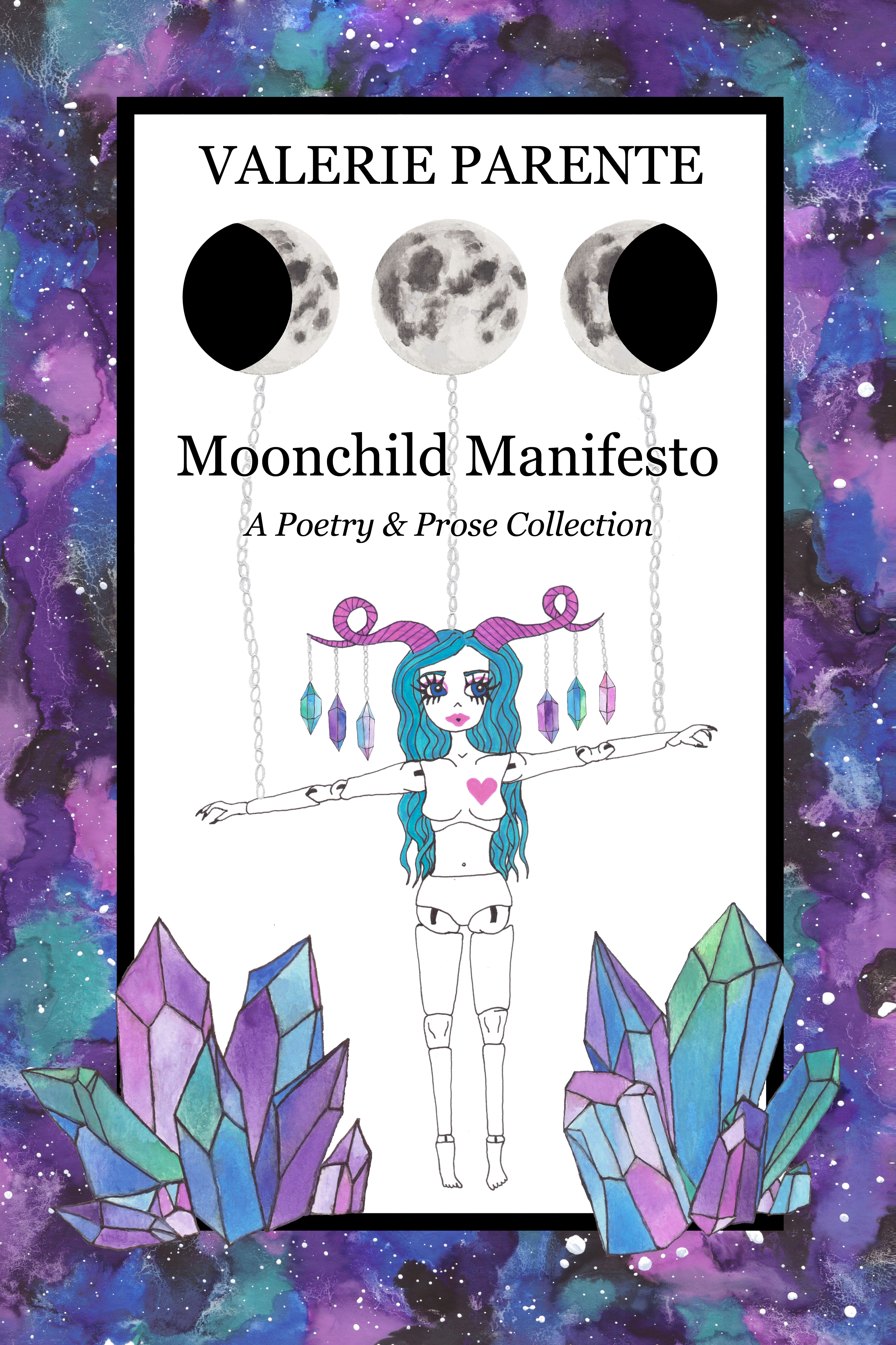 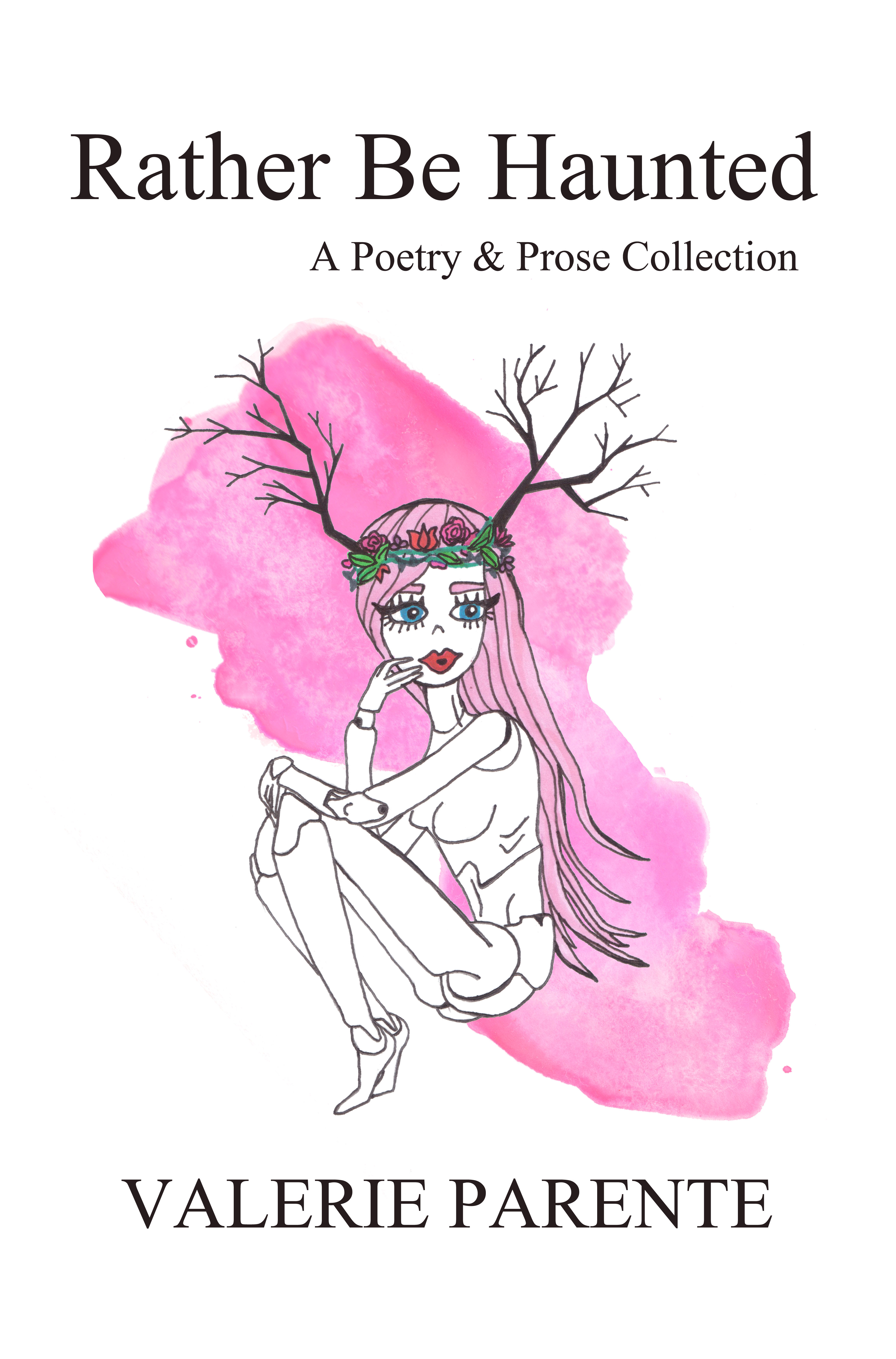 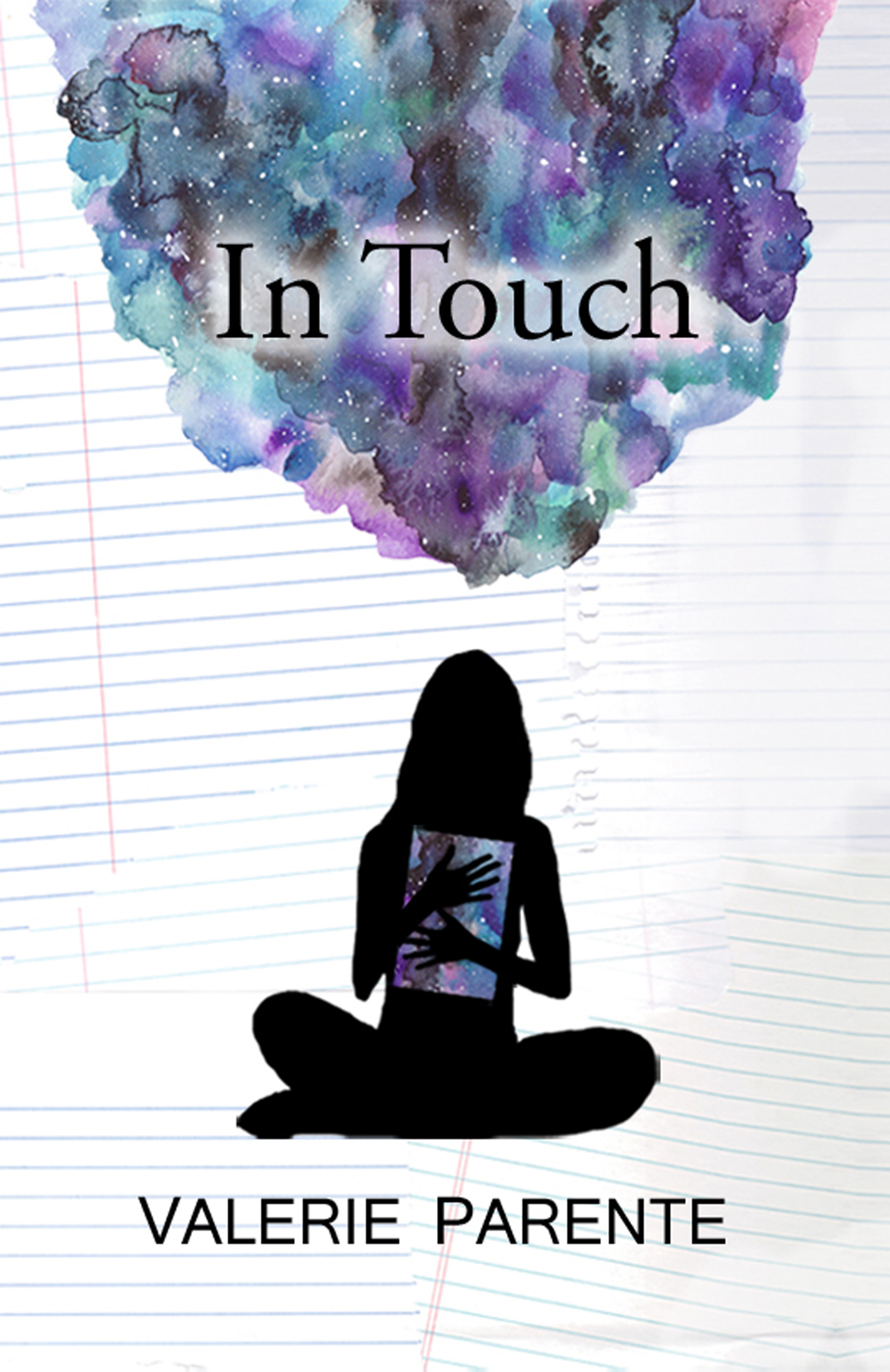 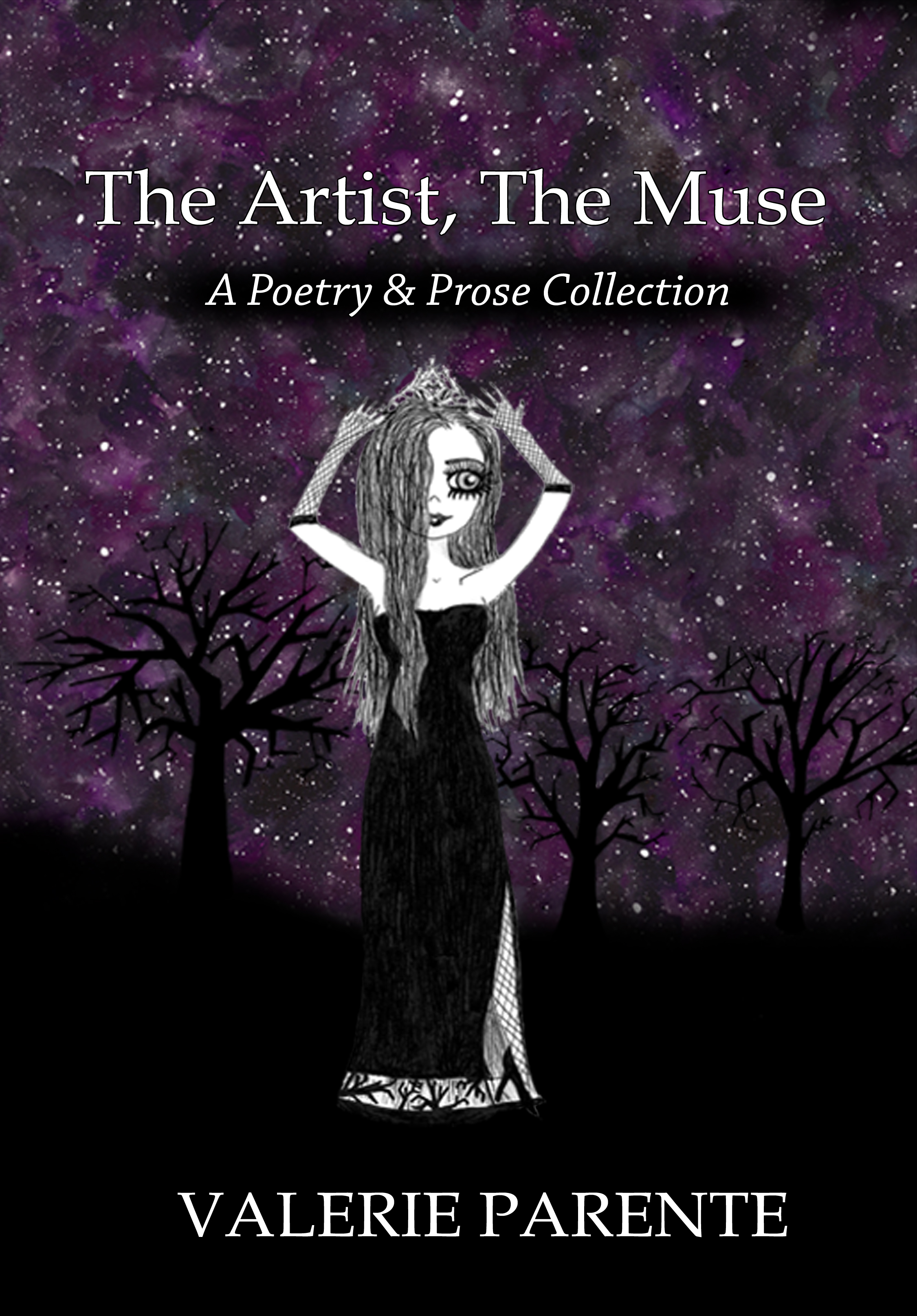